Modern network architectures need to be designed to support an increasing amount of requirements that range from guest wireless access and teleworker connectivity to mission-critical site buildouts, BYOD initiatives, and corporate network fabrics. Achieving a true digital ready network turns to be the results of a dedicated effort to improve four main components of network architecture.

The increasing amount of Wi-Fi connected devices plus the changes in workforce productivity, where a variety of tools and applications are cloud-based has put a lot of pressure in wireless connectivity to support user demands for speed and availability. Modern network architectures will be designed to support a high density of devices that can co-exist in a single space, further increasing the speed of all devices when there is more than one.

A new Wi-Fi protocol called 802.11ax or Wi-Fi 6, will take over the new generation of access points, a key component on a wireless network, improving performance by supporting packet scheduling, as well as increasing the efficiency of the use of any given band, making dramatic improvements in power utilization by mobile devices.

This new protocol will be adopted by modern network architectures improving the experience for almost all wireless users, from office workers, who will find that their devices communicate more reliably and quickly in crowded offices, to people supporting a variety of IoT devices, who will find that they can pack more low-power devices into a space with fewer access points.

Improving the performance of your wireless network with the Wi-Fi 6 protocol is the first step, then using high-resolution geolocation technologies based on those wireless radios, plus data mining software, modern networks can create opportunities to understand how people and things move through physical spaces.

Although this application can be highly associated with retail, education, medical, hospitality industries where there’s high traffic of customers at its sites, it can also enable regular businesses to access information about the users of their buildings/offices that will open up new possibilities for business extensions and improvements.

From a network management perspective, digitized spaces will bring visibility into areas where wireless service is weak, allowing the highly precise deployment of new access points. And since security is such a high concern, it will be easier for analytics engines to notice unusual patterns of movement among wireless devices that could indicate a breach.

In an IT environment where so many applications are running in the cloud, and so many end users rely on the open internet for connectivity when they’re not in an office, deploying a traditional hardware-based network no longer makes sense. Today, modern network architectures are adopting software-defined wide-area networking SD-WAN.

SD-WAN allows networks to route traffic based on centrally-managed roles and rules, no matter what the entry and exit points of the traffic is – and with full security. For instance, if a user is working on Office 365, SD-WAN will route their traffic directly to the closest cloud data center for that specific app, improving network responsiveness for the user and lowering bandwidth costs for the business.

For network administrators SD-WAN will open up new possibilities for machine learning, making it easier for teams to modify rules, having a more efficient use of the bandwidth, ensuring higher performance for critical applications, and improving security.

Deploying and Managing a modern network architecture requires deep insights into how all the different pieces work together, allowing rapid reactions to quickly-changing conditions that are unique to every network.
As modern networks will use SD-WAN to collect analytics, machine learning capabilities will not only help to identify patterns in network performance to get ahead of potential issues, but also identify common network behavior and alert when something seems out of the ordinary, potentially preventing security breaches from ever happening.

The possibilities of machine learning are infinite and will enhance the ability of network managers to spot anomalies in network behavior that might otherwise be missed, while also de-prioritizing alerts that otherwise nag network operators but that aren’t critical. This is especially important for businesses where the IT team has to deal with multiple business demands.

There you have it, four main components of modern networks. New technologies for access points, SD-WAN, and security that are to include machine learning capabilities to facilitate deployment and management. At Tekscape we specialize in the design, deployment, and management of intuitive networks, solutions like the one deployed for The Wing using Meraki access points are central to our engineering capabilities. Supporting customer’s networks so they can focus on what’s really important for their business is a key driver in our IT Managed Service practice. Do you have a networking need? We are here to help! 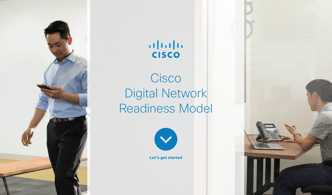 The Cisco Digital Network Readiness Model has been created to help customers gain a clearer picture of where they are on this journey and gain visibility into the opportunities and benefits of evolving to the next stage. The model is intended as a framework and guide that each organization can use and customize to suit its own needs and priorities.